Skip to content
What is a weapon? Is a pick ax a weapon? Is a chain? Is a knife? Is a bat? Is a skateboard? We all know guns are. But what makes a gun any more deadly than a skateboard, knife or pick ax in hand to hand combat or street fighting? If you’ve been to a protest in New Mexico where BLM or Antifa are present, you’ve probably seen the knives, bats and skateboards. As BLM and Antifa shout and seek to outrage us into fighting them, they’re seeking to make something bigger happen and hope to create a conflict.
Look at this through the eyes of militant urban terrorists, which is what Antifa, and possibly Antifa-linked BLM are, trying to get away with violence in a city environment. At least in Albuquerque, BLM have declared, “we the new police,” and they intend to exert their power and influence, intimidating all who cross their path. In a street-fighting position such as this group is in, a less obvious weapon such as knife might be a good equipment choice. An even better choice might be something that is not thought of as a weapon, such as a baseball bat, skateboard, or anything else that is associated with young people that they might be able to get away with carrying around.
Why Knives? When you’re in a close, mob-like situation, knives are far more dangerous than guns or other lethal weapons, not only for the victim, but the assailant as well. Knives take time, force the person carrying it to withdraw it and stab repeatedly and can be unpredictable. It’s also pretty hard to protect yourself against knives. For law enforcement (a top target of Antifa and BLM), knife-stopping armor isn’t as common as vests and bullet proof body armor, so an assailant might be able to better penetrate the armor and injure their target. Traditional Kevlar can easily be penetrated and can become useless against a knives. Cops are often forced to choose between armor protecting themselves against knives versus guns, depending on what’s more dangerous for their region or beat.

Why Bats, Batons or Skateboards? The truth is, all these weapons can be deadly. FBI statistics indicate that firearms are the most likely weapon to be involved in a homicide, but armed militants are not just aimed at killing people– that is not the purpose of a terrorist. The goal is to create disorientation, fear and upheaval in the minds of their targets, or as the Encyclopedia Brittanica defines it, “the calculated use of violence to create a general climate of fear in a population and thereby to bring about a particular political objective.”

A video from 2017 shows Antifa clash when federal law enforcement and skateboards weaponized in the violence that ensued:

These terrorists are focused on beating out opposition that stand in their way and looting, which satisfy the common members, but also accomplishes the goals of the masterminds behind them. If these are their goals, wouldn’t it be smart to choose weapons that fly below the radar and use non-traditional weapons that will not get the attention of law enforcement and might be what somebody would normally carry? For example, if I work in a warehouse and always carry a box-cutter with me, that’s a weapon from my natural environment, similarly, a sharp and heavy nail file wouldn’t be out of place for a manicurist and a mechanic would be expected to be weaponized with a wrench or pry-bar.

For these terrorists, it makes sense carry something harmless-looking, like a skateboard or baseball bat that is commonly thought of as normal for a college kid, but can easily be weaponized. These are individuals that has been taught that these weapons can be far less suspicious and will help you to accomplish your acts of urban terrorism. Where are the young people going with these items and why are they necessary to carry? In New Mexico, batting cages and parks have been closed, so why do we take a skateboard or baseball bat to a protest? In an article on jenkemmag.com a guide for skaters attending protests declares, “[A skateboard is] a tried and true device for quickly dipping out of tricky situations. And, of course, it can be used in self-defense. We’ve seen enough videos to know that a skateboard makes for a damn destructive hammer, but it also makes for a fantastic shield, and if you get enough skaters on the frontline you can link together to form a phalanx on some gladiator kind of tip.” The article further describes the usefulness of masks, “And, because we’re still in the middle of a pandemic, and because the police will use your identity against you, it’s a good idea to come with a mask on or at the ready.” Of course (sarcasm) none of this sounds shady or supportive of our concerns about weaponizing objects.

In looking at our local incident involving terrorists in Albuquerque, New Mexico, we see a similar pattern. Steven Baca was forced defending himself after getting mobbed by terrorist “protesters” at a community protest involving conquistador Oñate. In Steven’s case, we have an older guy (seriously, 40 years old?), weaponizing a skateboard. The Eye on Albuquerque released a number of good still images that showed how Scott Williams weaponized a skateboard against Steven Baca before Steven pulled his gun in self defense. See the powerful still sequence below: 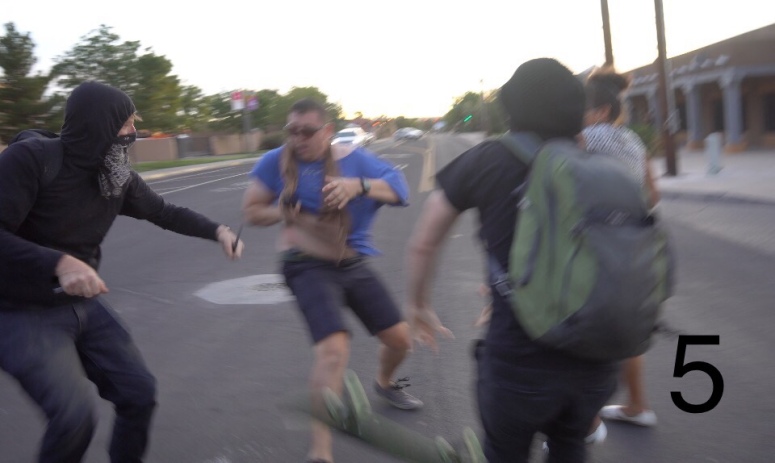 Can you catch the weaponized skateboard in the still images? How about the knife? Steven finally defended himself after taking multiple blows to the head and having his shirt pulled, as three terrorist assailants attacked and chased him. Just as recommended in the Skateboarder’s Guide to a Protest, all of the assailants wear masks (two wear hoodies on a hot summer evening, as well!), are dressed as the article directs and Scott Williams used his weaponized skateboard to try to kill Baca (in original videos there are shouts of, “We’re going to f*cking kill you!”).

Stay tuned as we look into and research other tactics and weapons these terrorists will use to intimidate, hurt and destroy us.