Our Leftist “friends” political hack Joe “Ho Jo” Monahan and the team at the Santa Fe Reporter (yeah, that includes the J&J Boyz: Joey Peters and Justin Horwath, as well as their mentor Peter St. Cyr) have completely ignored Davis’ DWI incident and his maneuvering around the problem. 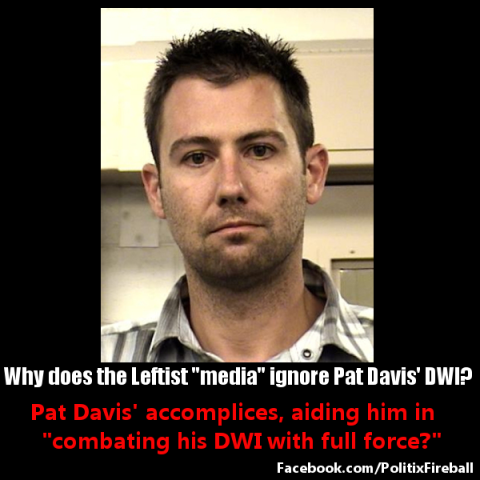 Davis is trying to wiggle out of an aggravated DWI, and as I wrote yesterday, it shows his complete hypocrisy.  In an endorsement of Pat Davis candidacy for Bernalillo County Sheriff a sheriff deputy claimed that Davis would be, “combating DWI with full force” if elected.

Does Pat Davis combating DWI include:

Does Pat Davis combating DWI include…Davis blaming the car in front of him for his hitting it while drunk driving?

Does Pat Davis combating DWI include…Davis claiming that the odor of alcohol on his breath and surrounding him was a new kind of “mouthwash”?

Does Pat Davis combating DWI include…Davis claiming that his obviously slurred speech was due to the sheriff deputy’s difficulty understanding his southern accent?

Does Pat Davis combating DWI include…And Davis failing to pass the sobriety tests he was asked to go through, but still saying he wasn’t driving drunk?

Where were Peters, Horwath and Monahan when Davis used ridiculous “Blame Bush” responses for his driving drunk?  They have ignored the issue.

The J&J Boyz have a history of relentlessly going after scandals– and the bigger the better.  They’re willing to go after “alligator-gate”, Chuck Franco’s hunting trip to Louisiana (which turned out to be nothing more than another conspiracy theory from the Left) and “email-gate” where these “journalists” aided the illegal dissemination of Governor Martinez stolen emails.  As Leftists the J&J Boyz constantly demonize Republicans.  Of course when speaking of Joe “Ho Jo” Monahan, we can add a few more marks to the slate.

But enough about these “journalists” backgrounds.

If the J&J Boyz were in earnest and trying to be honest they could take on the story of Patrick Davis executive director of Progress Now New Mexico.

The tell-tale bias is disgusting.  No doubt Monahan and the J&J Boyz are allies of Davis and are working with him to help him get off.  The Left has hopes that if they ignore the problem long enough the problem will, “just go away”…

One thought on “Why does the Leftist blogosphere ignore Pat Davis’ aggravated DWI?”