ALBUQUERQUE: Yesterday we reported on the arrest of Robert Cornelius, the campaign manager of Albuquerque mayoral candidate Ricardo Chavez.

This week Cornelius was arrested and booked with a $2,000 cash bond after a routine traffic stop caught Bob driving with an arrest warrant for failure to appear in court and driving with a suspended drivers license.

Sources close to the campaign tell us that mayoral candidate Ricardo Chaves has indicated he has no intention of firing Cornelius.

However, Chaves did attend yesterday’s mayoral forum without his manager.  Maybe because now it’s pretty clear Bob, doesn’t have a driver’s license?

Court records show that Cornelius was ticketed in Harding County on May 27, 2016 for speeding and driving on a suspended license.

In a statement to the Albuquerque Free press, Cornelius claimed he hasn’t updated his address, as required by New Mexico State Statues, for multiple years and said this is why he didn’t know there was an arrest warrant out for him.  Was he even lying about his address when he ran for Land Commissioner in 2010?

“If you have a ticket that is past due they suspend your license,” Cornelius said. “I don’t remember getting a letter saying that my license was suspended. If they mailed it to the Tatum address, I haven’t lived in Tatum since high school.” 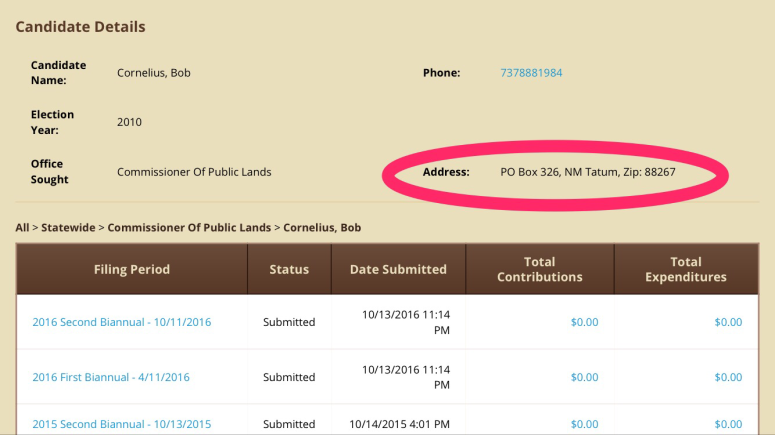 Apparently Chaves is choosing to ignore Cornelius’ recent shadiness and history of embarrassing Republicans and Republican Party officials– from his employment with the Gary “Tire Slashin'” Smith congressional race, to spending thousands of dollars on RPNM National Committeewoman Rosie Tripp’s credit card in Tampa, Florida at the RNC convention in 2012.