As we begin to see New Mexico politicos and candidates align for 2018, we’re seeing some changes that the year may bring and a number of interesting developments.

This week on the Republican side, another candidate, Land Commissioner Aubrey Dunn, announced his bid for the congressional seat governor hopeful Steve Pearce is vacating, joining Republican state Representative Yvette Herrell who also hopes to win the congressional seat.  There are rumors that two or three more candidates may jump into that race as well.  It’s going to be an exciting year, just with congressional district 2’s seat open for the taking.

But what’s kept us the most interested is Albuquerque politics and the actions of progressives and opportunists in our state’s largest city:

During the last month, #FakeNews reporter Joey Peters signaled he is leaving New Mexico to return to the bastion of liberal thought, Minnesota.  Word is that his wife got tired of hearing about how he stalks women.  But what do we know?! 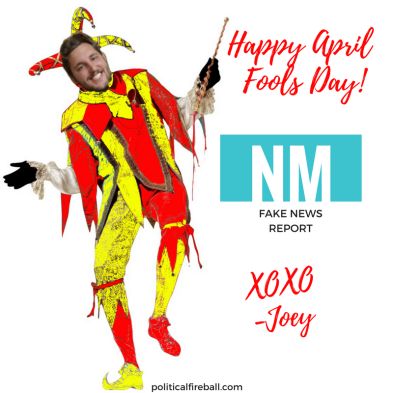 In April we awarded Peters with our “April Fool’s Top Fake News Reporter” recognition.  Some examples of his excellence in #FakeNews reporting include obsession with harassing female political opponents, which borders on stalking:

Hide your credit cards everyone, Robert “Bob” Cornelius is back, after two years in Texas (rumor has it he was chased out of the Lone Star State).  KOAT 7 tells the story of Bob Cornelius, the 2012 Republican National Committee alternate delegate who faced a felony arrest warrant after he ran up thousands of dollars worth of hotel and other stuff on a fellow Republican’s credit card at the 2012 RNC convention in Florida.

Wonder how that happened?  We asked around and nearly every Republican State Central Committee member we know who knew Bob in 2012, says the incident was not accidental and was horrific;  They say Bob just placed thousands of dollars of purchases on somebody else’s credit card, purposefully!  Our editor was an alternate delegate to the RNC in 2016 and says there were a few jokes about the incident in Cleveland, Ohio last summer, but some folks still don’t think it is that funny. 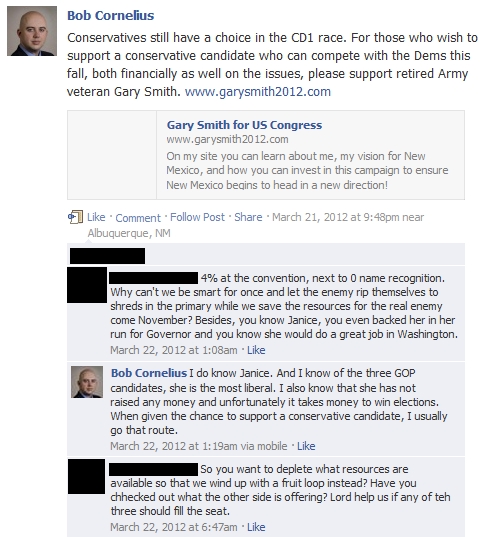 This year, Bob Cornelius has already fleeced Albuquerque mayoral candidate Ricardo Chaves to the tune of $100,000.  Where will New Mexico’s favorite con man head next?!…