This week the Santa Fe Reporter, an alt-weekly paper in Santa Fe, frequently staffed by far left media operatives, wrote an article defending their recent hire, Aaron Miguel Cantu a free-lance reporter and activist who has been indicted on eight felony counts, and is charged with inciting the onslaught of rioting and violence that accompanied the January 20, inauguration of president Donald J. Trump.  When a couple hundred protesters were arrested on rioting charges, Cantu was one of a handful who claimed to be a journalist.  The charges were dropped against the others, while Cantu was charged with eight felonies, which could total a sentence of up to seventy-five years in prison.

A couple of articles have surfaced showing that Cantu has had anything but a journalistic and fair approach when covering Trump-related stories and Republican activities, instead referring to Trump supporters as “racist” on a number of occasions and in one story he said, “should be ready to fight them, on this medium and all others.”

While most media organizations, and certainly mass media groups like the Associated Press and USA Today, would decide not to hire a free-lance journalist caught up in a tangled web, the Santa Fe Reporter dived right in and proudly hired accused rioter Cantu.  Santa Fe Reporter Editor and Publish Julie Ann Grimm boasted,  “We stand behind him and look forward to his continued good work in his new home in Santa Fe.” 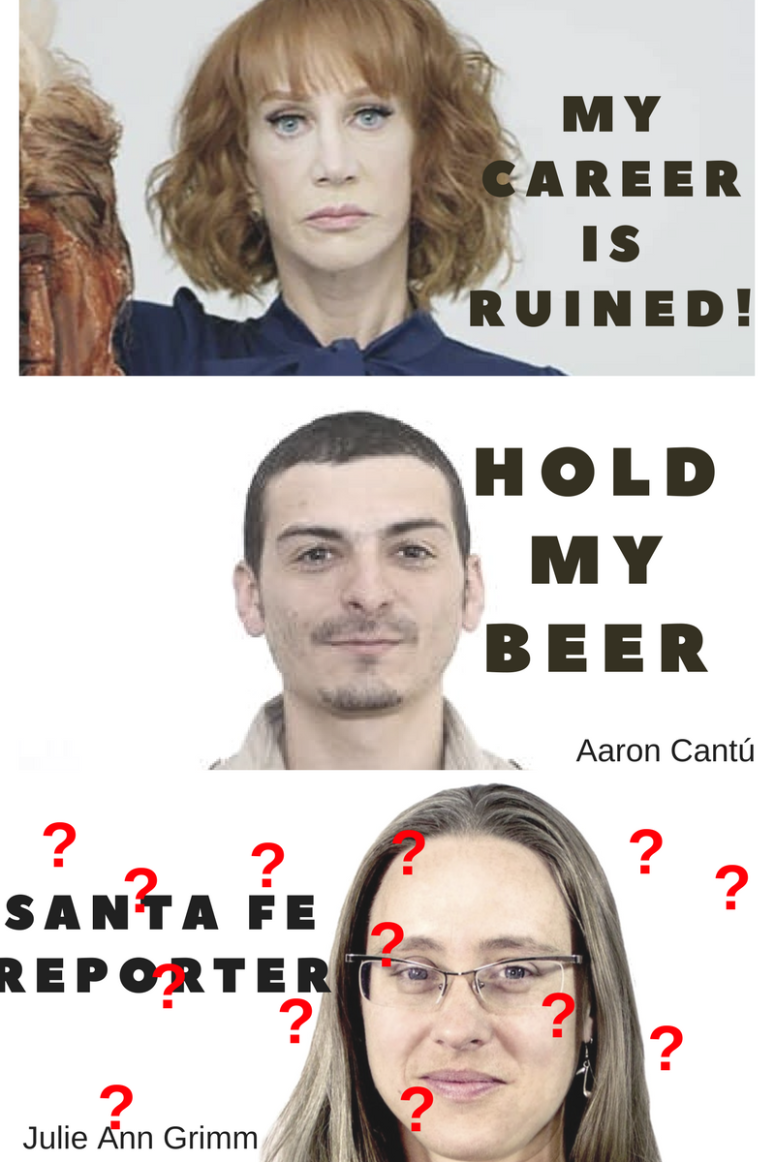 According to a search run on the Twitter searching site, allmytweets.net, Cantu has 493 tweets on Twitter at press time, but according to his Twitter profile, Cantu should have 8,288 tweets.  The oldest tweets on his account are from March 7, 2017. Cantu apparently deleted over 7,500 tweets, perhaps in an effort to hide something?

Cantu has 493 tweets according to All My Tweets, tweet-searching service

Accused Rioter Called Trump Supporters “Racist”, “Fascist”, stated “fight them, on this medium and all others”

In his journy as an activist and free-lance writer, Cantu has contributed to a number of progressive websites, specifically writing critically of law enforcement and in favor of marijuana legalization: Truth-Out.Org, ibw21.org and alternet.org to name a few.

In June 2016, Cantu wrote for the blog littlesis.org, “Although presumptive Republican nominee Donald Trump often whips crowds into a racist frenzy over foreigners–particularly Mexicans–“stealing” American jobs, three of the four chairs of the RNC’s Cleveland host committee have ties to Eaton.”

In a December 2016 piece recapping the year, after what he describes as a rough year due to inability to pitch stories to higher bidders, Cantu wrote about his coverage of the RNC:

When summer came, I felt like I had to attend the Republican National Convention to see American white nationalism in full bloom, so I asked the Washington Spectator to send me there. The media had anticipated a major clash, but that didn’t happen; it was instead a gathering of the worst this country has to offer. I held my tongue for three days in order to talk to all stripes of Trump backers, from an alt-right Internet whizz to an old Nixonite racist (who, actually, I found charming). There was a lot that concerned me throughout the trip, but the desperate behavior of the press corps stands out —it was disturbing to see how easily some were manipulated. Many swarmed all over “dapper” alt-right mascot Richard Spencer, just as he’d hoped they would. I questioned whether I really believed in what I’d been sent there to do, and my last night there — after I had filed my story — I relished the chance to argue and talk back instead of passively report people’s garbage. I even got to salute the soon-to-be 45th president, just outside the building where he accepted his party’s nomination. Heil Trump!

Then Cantu turned aside and sounded rather crazed, with hatred toward Republicanism and imagined change that a Trump presidency brings:

I haven’t figured out how to best deploy my writing going forward, in the post-truth, far right-ascendant world. I’d like for my words to be the sparks that light a torch, the metal that sharpens the tips of a pitchfork, to go viral in the all-consuming sense of a virus that eats fascist flesh.

We should continue to ask ourselves why it wasn’t enough, and push ourselves to find solutions. We should be thinking about narratives and framing, and be conscious of the fact that, yes, we have enemies, and they would take away the things we value most if they had the chance. We should be ready to fight them, on this medium and all others.

Perhaps these were the thoughts that were going through Aaron Miguel Cantu’s mind as he visited Washington D.C. on January 20th, for President Trump’s inauguration?