Catching the sights, pre-conference on Friday! Visiting Washington D.C. this past week was fantastic!  With this visit as our first, we planned to take it all in!

We began our D.C. tour Friday, coming in from Baltimore, Maryland in the morning and disembarking at Union station.  Stepping off the metro, I felt like Jefferson Smith with so many amazing sights to see!  Mr. Smith Goes to Washington– a young Washington outsider and boy scout leader who is “accidentally” appointed a U.S. Senator by his state’s governor and visits D.C. in awe…but the awesome-ness doesn’t last long…through an innocent bill he proposes, Smith eventually finding himself confronted by a corrupt Montana government machine with deep roots in Washington and [barely] manages to overcome the corruption and media bias after a loooong filibuster on the Senate floor.

From the station we went to the Capitol, stopping at the Rayburn Building where we connected with Congressman Pearce’s staff for a House Gallery pass and a guide through the tunnel to the Capitol (thank you, Andrew!).  At the House Gallery — where no cameras are permitted 😦 — we watched Congress during House votes.  Prior to the votes, Congressman Pearce came up to the gallery and visited with us for a few minutes, explaining that Congress had been on the House floor debating until midnight the previous evening.  From the House Gallery, Rep. Pearce pointed out several Representatives– we also spotted Rep. Trey Gowdy and Speaker John Boehner.  I was surprised to learn that there is no assigned seating for Congress– really? After sitting in the House Gallery we took a tour of the Capitol.  I snapped many pictures on my iPad as we toured around with folks from around the country, and even some international folks.  We saw the beautiful paintings in the rotunda (the dome of which was, unfortunately, under restoration during our visit), the original House floor aka Whisper Room aka Statue Room. 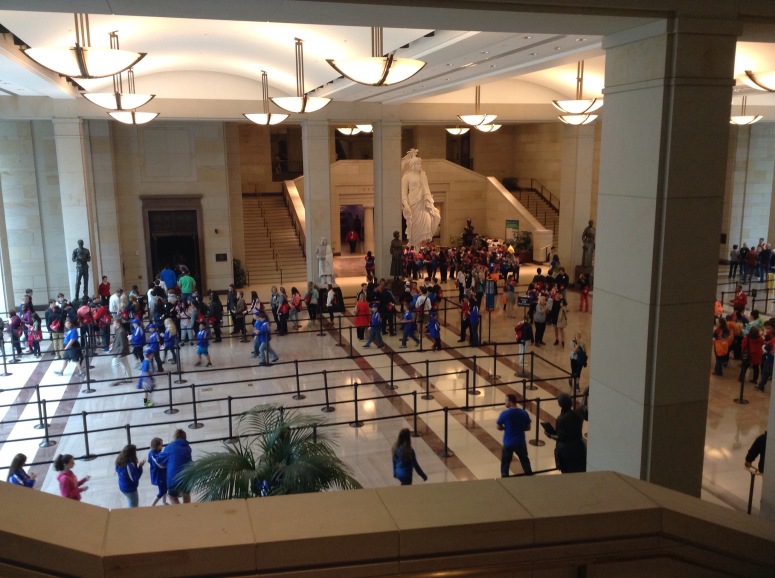 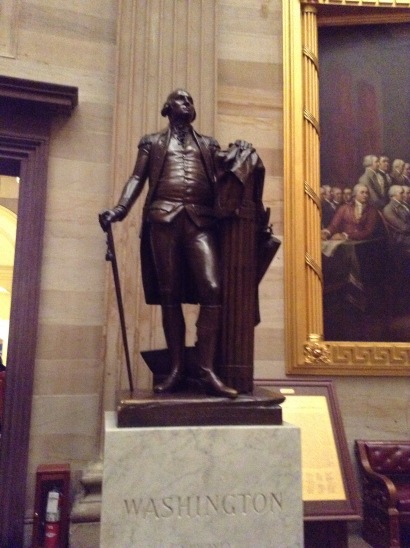 Then we met up with a friend for a fantastic tour of the beautiful Library of Congress building getting to see the House and Senate Reading Room, where the public is not permitted to visit.  The room was gorgeous and the hall was breath-taking!  Prior to knowing we’d get a special tour, I’d been told to make sure to visit the Library of Congress– yes, it is beautiful!  We later returned for more pictures of the inside of the building and to see the original library President Jefferson, donated to the Library of Congress. 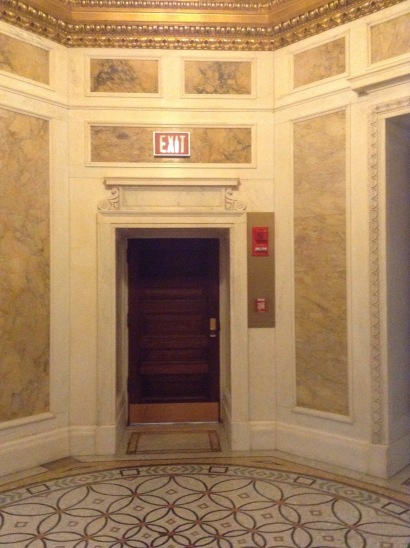 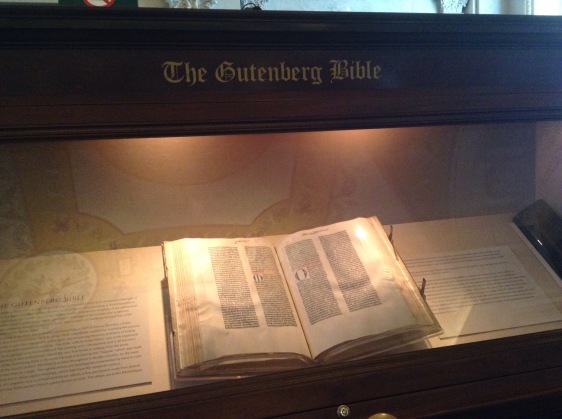 The next building we visited was the Supreme Court. 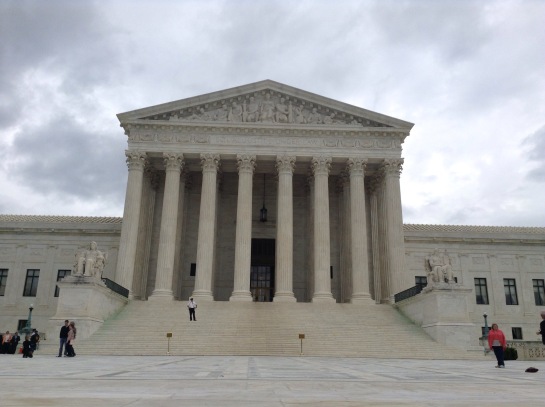 More on Sunday! Sunday we waited in line three minutes awaiting the opening of the National Archives.  Again, no picture-taking was permitted, but we saw the Constitution, Declaration of Independence and other founding documents and letters. We then proceeded to the Smithsonian American History Museum.  Except for the Star Spangled Banner flag, I found the museum rather unimpressive and impersonal.  I suppose that’s because I’ve been to many museums across the country, many of which see less traffic. 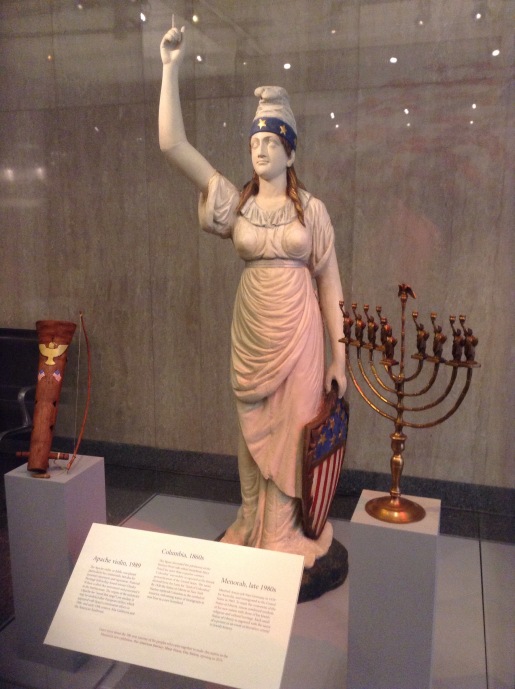 We received a surprise at the Washington Monument as we watched a few dancers at the National Cinco de Mayo Festival!  Where’s the green chile?! 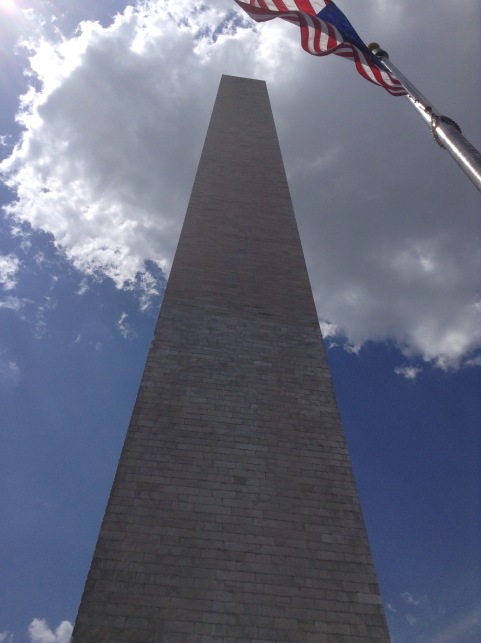 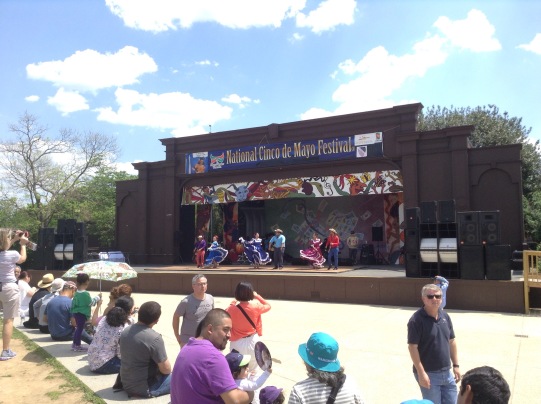 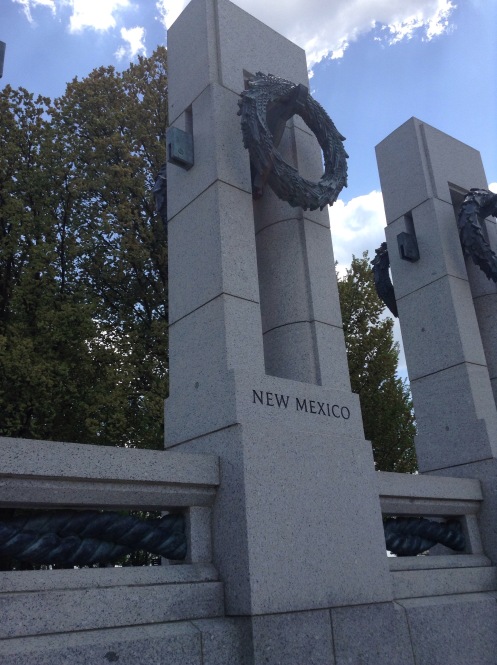 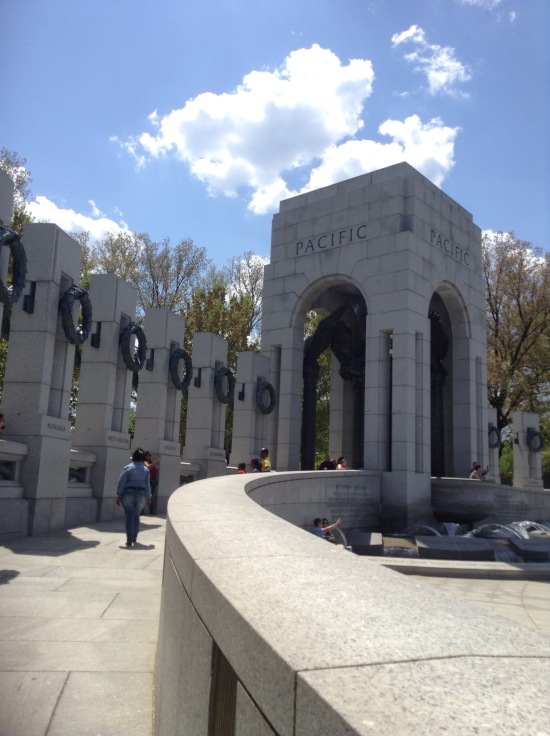 Next up was the Lincoln Memorial which was beautiful, but very crowded! 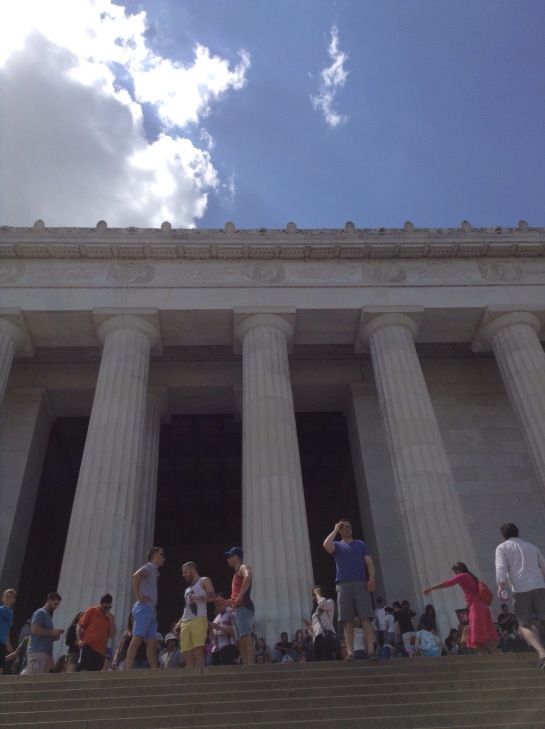 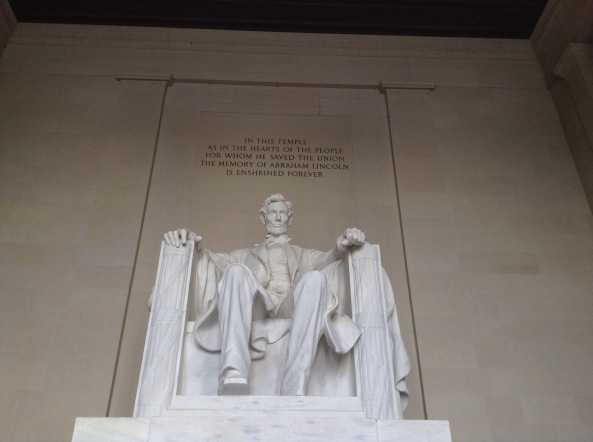 A picture of freedom– two guys playing chess on the Lincoln Memorial with the Washington Monument in the background!

At the foot of the Lincoln Memorial we spoke with a local family which confirmed that the Jefferson Memorial was only about one mile away if we took the right path, so armed with Google maps, we set out for the Memorial where we took a gazillion more pictures!

With an hour and a half left before the closing of the Smithsonian’s Air and Space Museum, we set off running with our suitcase in tow (the poor thing was dragged over seven miles on Sunday alone!).  My goals were to see two things– the Spirit of St. Loius and the original Wright Flyer.  I’ve seen replicas of both, but nothing beats the real thing!  We not only saw the two planes, but toured most of the museum before it shut down and took pictures with Amelia Earhardt’s airplane which she flew while breaking two records as an aviatrix.  Earhardt has been a heroine of mine for years!

What a fun vacation and adventure!!

Parting comment from Mom the last time I spoke with her before returning home– “All you need is your bird cage.” (A reference to Mr. Smith Goes to Washington— newly-appointed U.S. Senator Smith brought carrier pigeons to Washington so he could write his Mom)