What does the Ex-Im Bank do and why should we vocally stand up and oppose it?

Government subsidies work by taking tax revenues procured from other businesses and redirecting them towards lucky targeted sectors and businesses, like agricultural interests who benefit from the farm bill or, in the case of the Export-Import Bank, export-driven manufacturers like Boeing and Caterpillar. Politicians and subsidy recipients frequently justify the practice of subsidizing private industry with public revenues on the basis of “saving jobs,” “stimulating industry,” or “protecting domestic production,” but in reality, subsidies lack support in both economic theory and in practice.

Here are the basic problems:

First, subsidies transfer resources away from low- and middle-income Americans and small businesses towards large, well-connected corporations. Sometimes, this regressive effect can be compounded by higher prices of the subsidized good. In the case of higher education, for example, tuition costs have been consistently rising in tandem with expansions of government loan subsidies to students. Universities take advantage of the knowledge that Uncle Sam will take care of the bill by raising tuition levels to the ultimate detriment of students.

Third, subsidies trigger wasteful spending for political favors. Not only do subsidized industries use our tax dollars to make a profit, they use this leverage to push out of the market other honest businesses who don’t enjoy these privileges….Entrepreneurs and businesspeople have an incentive to procure government subsidies to stay afloat, which wastes more time and resources through the deadweight loss of unproductive lobbying spending. (Wouldn’t Boeing dollars be better spent actually developing new planes that people want to buy without subsidies rather than paying off politicians?)

Fourth, subsidies dull recipients’ competitive edge and may ultimately undermine their long-term viability. Subsidized businesses often grow complacent and lazy because they know they can rely on government assistance. When markets change and pressures mount, subsidized industries often find that they simply cannot keep up – so they come knocking to Congress for a bailout.

In short: The Ex-Im Bank provides wasteful subsidies that will not benefit any of us.  Additionally, if you’re a New Mexican, the Ex-Im Bank is particularly useless– notice New Mexico is among the last on both charts below: 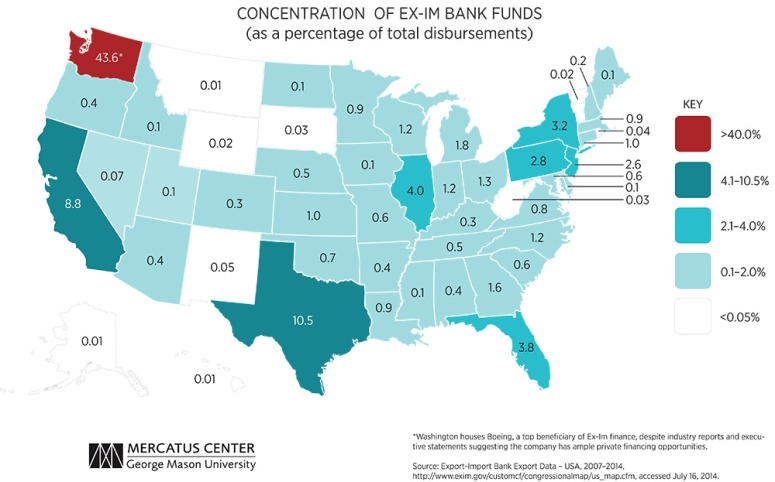 More charts and breakdown of the above charts here.

With Heritage Action’s email form, it is easy to let your two U.S. Senators and Congress member know where you stand on the Ex-Im Bank reauthorization.

>>> Send an email today telling your Senators and Representative in D.C. that you oppose the Ex-Im Bank! <<<

Want more information on the Ex-Im Bank?  Would you like to become more vocal in opposing it?  Send me an email here.