Over the past week I have written half a dozen blogposts about Pat Davis’ the Progress Now New Mexico radical Left executive director. He has a double standard, uses of low tactics, and the Leftist media is willfully silent regarding Davis’ recent aggravated DWI.

Pat Davis is known for his witch hunts against political opponents.  He enjoys portraying people as “racist” for a simple tweet. He misunderstands legislation of a well-meaning pro-life legislator and twists it to use against her. He politicizes tragedies in hopes of making headway on his gun control agenda front.  There are no holds barred and no levels too low to play in Pat Davis’ book.

(Blogposts about those issues can be found here)

But back to Davis’ DWI…

Aggravated DWI carries license revocation penalty, but a Leftist operative like Pat Davis can wiggle out of such an inconvenient and uncomfortable penalty.  Allies including Joe “HoJo” Monahan, the J&J Boyz (Justin Horwath and Joey Peters), etc. are of course assisting him by remaining silent on a “sensational” subject they would love to pick up if Davis political affiliation were Republican. Because Davis is a Leftist, the DWI doesn’t matter…

Remember, to Pat Davis the law is only to be respected if he is the one enforcing it (he’s an ex-cop) or if it is to his advantage.  If neither of those situations are the case, he will just wiggle out and keep up the fight!

Perhaps one of the greatest things that drives home Pat Davis’ defiant attitude and disrespect for what is right and proper, are the below pics he posted on Facebook.

It appears that Pat Davis is driving, taking pictures and posting them to Facebook via mobile. 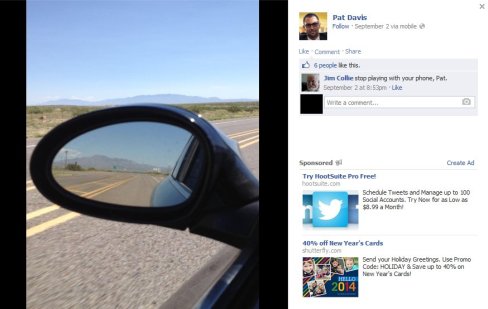