SANTA FE, N.M. — It was barely noticed on Capitol Hill, but the budget deal that just passed both houses of Congress changes the split between the federal government and states when it comes to royalties in oil and gas collected on federal lands by 1 percent.

That may not sound like much, but it translates into a loss of $100 million for New Mexico and $415 million across the country over the course of the next decade, and western states will be hit the hardest.

“I don’t think it’s a good deal at all,” New Mexico State Treasurer James B. Lewis told New Mexico Watchdog Thursday. “New Mexico needs every dime, every nickel we can get. It looks like it’s permanent and it’s sad that we didn’t get a voice in it.”

States like New Mexico and Wyoming each have vast tracts of lands owned by the federal government where energy companies extract oil and gas. In the past, the feds and the states split the royalty payments 50-50, but under the provisions of the new budget deal, the split will shift to 51-49 in favor of the federal government.

The change will reduce New Mexico’s cut by about $10 million a year over the next 10 years. 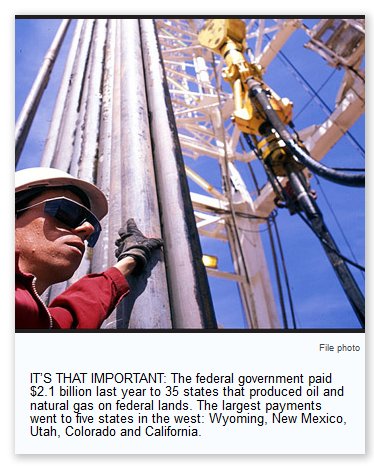 “It’s really a 2 percent change,” Lewis said, pointing out that since the federal government will receive 1 percent more, that means states will get 1 percent less each year.

“A week ago I talked to the treasurer of Wyoming and I’ll be collaborating with that office to see what we can do about this,” Lewis said.

Rep. Steve Pearce, R-New Mexico, voted against the budget deal, and said the royalties issue was one of the reasons why.

“These cuts are not pocket change to the West,” Pearce said in an email. “New Mexico schools and infrastructure projects depend on these payments, and losing out on nearly $100 million that is rightfully ours will only harm our communities.”

According to the Associated Press, the federal government paid $2.1 billion last year to 35 states that produced oil and natural gas on federal lands. The largest payments went to five states in the west: Wyoming, New Mexico, Utah, Colorado and California.

Wyoming will be hit the hardest as it will likely receive about $200 million less.

This is the second time this year the fight over energy revenue and federal lands has cropped up.

This spring, the Obama administration cited sequestration cuts and ordered the U.S. Department of the Interior to seize mineral and energy royalty payments from 35 states. New Mexico took a $26 million hit.

But after protests from western states, including proposed legislation in the U.S. Senate by Sen. Tom Udall, D-New Mexico, and senators from Wyoming, the Obama administration reversed course and announced in August it would return the payments.

In an email, Udall said he voted yes because thye deal would roll back sequestration cuts and provide a level of certainty “that New Mexico’s federal installations have said is desperately needed.”

But Udall pointed out that he’ll resist keeping the royalties split from becoming permanent.

“While this administrative fee has already been in effect since 2008, it is money that I believe belongs to New Mexico and other states,” Udall said Thursday, adding, “I will continue fighting to make sure New Mexico gets its fair share of the royalties from the sale of oil and gas in our state.”

The reason for changing the royalties split?

The Department of the Interior said the reduction to the states has been going on for years and the budget deal simply formalizes things.

Officials at the New Mexico Department of Finance and Administration confirmed to New Mexico Watchdog on Thursday that the federal government has been taking a 51-49 cut since fiscal year 2008 and that department analysts already budgeted for the estimated $10 million annual reduction.

The feds also said changing the split to 51-49 will pay for administrative costs to manage mineral leases.

But Pearce isn’t buying that argument.

“They have been managing the administrative costs for decades without taking additional millions from states,” Pearce said. “Imagine if the federal government took control of the Port Authority of New York and New Jersey, took 50 percent of its $4.1 billion in net revenue for 2012, and then decided to take another $82 million on top of that to cover administrative costs. New York and New Jersey wouldn’t stand for it, but that is exactly what the federal government is doing to the west.”