The bad gun bill HB-77 is back, but after the Courts, Corrections & Justice Interim Committee meeting Friday the 22nd it appears that the bill is completely going down.

Six thousand emails were sent this past week, in just a couple days, to members of the Courts, Corrections & Justice Interim Committee.  People from across the state joined in sending emails to their public servants in Santa Fe. 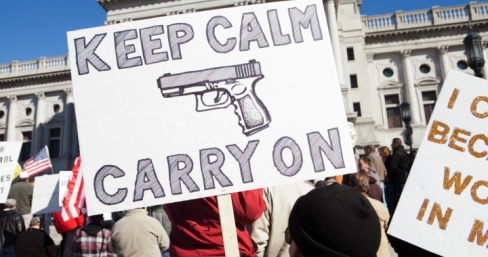 The committee meeting Friday shows that legislators and their constituents have serious concerns about last legislative session’s bill.  Sen. Daniel Ivey-Soto (D. – Albuquerque) suggested that collection of data on supporters of the second amendment might be an infringement on both the second and fourth amendments.  Second amendment supporters from across the state flocked to the meeting to speak in behalf of gun rights.  Typical of our state’s legislature, the meeting was running late and there wasn’t enough time for every gun rights supporter to speak, but this just showed that our side showed up in force!

Other legislators that we didn’t hear from very much are stepping out as well.  The opposition is growing as constituents push their legislators to support the second amendment and our state’s constitution.

One of the most important factors to mention is that the band of eight Republicans that supported HB-77 last winter is unraveling (story from last legislative session here).  Representative Paul Pacheco (R. – Albuquerque) has a long record of service in Albuquerque law enforcement and has seen that HB-77 is a bill that takes our state in the wrong direction.  He’s taken a part in standing against resurrecting the bill for this session.

I’ll be following this gun rights issue in the coming months.  Stay tuned for more updates– we hope to have video clips from the committee meeting soon!

Hear something new?  Email me here.