Thin skin?  When Peter St. Cyr jumped in on a conversation between Chris Donnelly and I this afternoon, he was interacting with two people he’d blocked, presumably so he wouldn’t see their tweets.

Funny, I don't remember you saying that for the minimum wage in #ABQ.. @Peter_StCyr @PolitixFireball @PamSNM

Why do you say something now and not then? Only show your conservative side after the fact? @Peter_StCyr @donnellynm @PamSNM #nmpol

Who is St. Cyr attacking?

Wait…where did this come from?  I thought the conversation was over, but two hours later wannabe journalist St. Cyr returned for more:

This “character assassination” claim is bogus.  Leftist bloggers in New Mexico are accustomed to getting away with any lie they can dream up to hurt those they hate– the Republicans.  As far as they’re concerned if they print it, it is true and if they do it, it is okay, ethical and legal.

Anyone daring to mention these Leftist bloggers’ repeated use of bad sources such as stolen emails will be attacked.  Even Attorney General Gary King was warned by the FBI he may have violated a federal law by disseminating Governor Martinez’ stolen emails.  But if these “journalists” (especially those writing under the Santa Fe Reporter banner as well as Joe Monahan), wish to use the stolen emails it is great in their opinion!  When anyone dares to question the “journalists”, their tactics, or share a different perspective, their actions must be given a terrible-sounding term such as “character assassination.”

You know you are winning when…

Back to thin skin.

St. Cyr’s sensitivity to being called a “fake journalist” shows below..  He was so angry the first time he sent the tweet he made two errors and deleted both tweets.  He finally got the third one right.  I managed to read the mistakes before he deleted and have a screenshot below from my phone: 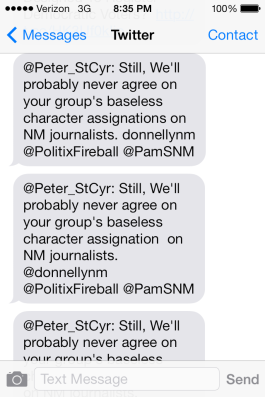 My question:  Who is this “group” St. Cyr is referring to?  Is this an attack on conservatives in general, an attack on Republicans (all tagged in the post are Republicans to my knowledge), an attack on anyone who opposes Leftist biased writing?  Or an attack on Chris, Pam and I personally?  Is anyone who questions fake journalists part of some “group” that St. Cyr has made up and hates?

Truth has no agenda.

“For we can do nothing against the truth, but only for the truth.”  II Corinthians 13:8