All the below screenshots are open to the public.  Anyone can (or could) take their own by visiting Terry Schleder’s Facebook profile, though as things have moved along, Schleder has started to delete some of these Facebook posts, namely those I provided in this pdf Monday.

The New Mexico Foundation for Open Government (NMFOG) announced they have a new executive director, Terry Schleder.
According to NMFOG’s website (statement below) he is dedicated to ensuring there is transparency in government.

Sounds good, right?
Well…NMFOG, had a mediocre executive director previously who (though personally a leftist) at least made an attempt at being open minded and filling the position as advocate for open government for all concerned.  Now that the former director has departed, a new blatantly partisan director has been appointed.  Terry Schleder, the healthcare advocate and union activist.

From Michelle Bachman and Rick Santorum, to Mitt Romney and Paul Ryan, Schleder is not a fan of the Republican presidential candidates from 2012!  Check out his posts below.  He ridiculed Sen. Santorum’s name in one and called Gov. Rick Perry ‘the enemy’ in another!  He said he was ‘obsessed with Newt’ and would ‘miss him when he goes down in flames.’

Later he added his own comments to the big bird picture, ‘Romney wants us unemployed.’

Dating back to the past 2012 primary and general presidential election we can see that Schleder did not support the Republican candidates for President: 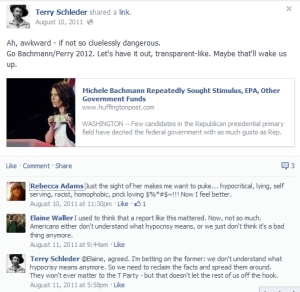 Criticism of Lt. Gov. Sanchez for reaching out to Hispanics.  Schleder encouraged his friends to join the Progress Now New Mexico protest against an event attended by Sanchez: 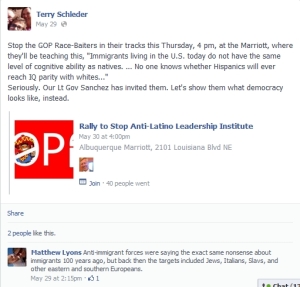 Schleder talks about crushing ‘the Tea Party lies with history and facts.’ 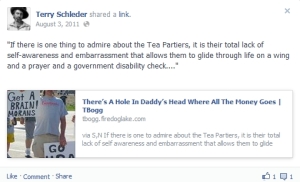 This April, Schleder supported the counter-protest against the Tea Party:

Did somebody mention the 2nd amendment?  Terry Schleder has an opinion on the 2nd Amendment defending NRA, too!  More attacks:
‘My grief has propelled me to engage with the folks on the NRA’s FB page.’

Are Catholics stuck in the past?  This could be considered offensive…

Here you can see Terry’s son sporting an Obama T-shirt in 2008!  YES WE CAN!…don’t miss the group posing in front of the Obama billboard!

Schleder, the outspoken supporter of the Democrats and their candidates!
Warren:

And Anthony Weiner is a great guy…no matter what he did!

And, Schleder supports Democrats in general:

But, lest we appear to ‘democratic,’ we must also see some strong support of the New Mexico (un)Occupy movement…Terry Schleder loves the Occupy movement!

Schleder even went up to New York City to participate in the real Occupy Wall Street protest:

For those protesting the Gay Pride activities Schleder, shares pictures (with captions):

“Butterscotch [Schleder’s dog] relieved herself for the protesters.  No lie.”

“A gift from Butterscotch for the protesters.  Dog poo is in Leviticus, right?” 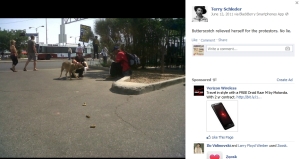 Again he attacks those who do not agree with Gay marriage:

But there is more to it than simply the importance of supporting the LGBTQ community, according to Schleder.  He actually sounds like he believes in conspiracies when he warns Gays to watch out for conservatives who are open to ‘marriage equality’:

To finish off our tour of Terry Schleder’s views as proclaimed on Facebook, you can see the memberships he holds in eight open groups.  Of the eight open groups he is a member of, two are support-groups for the LGBTQ community, and another is for the Albuquerque (Un)Occupy movement.  Why would somebody who was just an advocate for open government be so interested in groups that are so partisan?

For anyone who looks into Schleder, it is obvious that he is a very determined leftist, progressive and Democrat.  His past makes it clear he is not non-partisan…  How can Schleder attempt to be balanced at all as he advocates for ‘open government’ in his new position?
Why on earth would the New Mexico foundation for Open Government hire a clearly partisan activist to be their executive director?  As recent as this year Terry Schleder has demonstrated support of one political group over another.  While he repeatedly attacked Governor Martinez and Congressman Steve Pearce, there was nothing but support for Democrat office-holders!
An organization that ought to be supporting open government for citizens is being equipped to be the tool for the Democratic Party of New Mexico and the left.  Sadly, it seems that New Mexico’s Foundation for Open Government is dropping to a new low with their choice for partisan Democrat hack Terry Schleder!

All the above screenshots are open to the public.  Anyone can (or could) take their own, though as things have moved along Terry Schleder has begun to delete some of these Facebook posts, namely those I provided in this pdf yesterday.