I have been acquainted with Occupy New Mexico for some time.  The first time I heard of the movement was when the occupy movement started and I ran into an interesting piece which tied ONM to the Democrat Party of New Mexico.  Granted there are many in the occupy movement who are not Democrats, but there are many who are and consider this a grassroots movement for the Democrat Party to push the progressive agenda:

The flyer below, which can still be found on the New Mexico Democrats website, reads as follows:

What does this have to do with us?

on the Occupy Wall Street Movement

Sponsored by Miller Library, the
Department of Social Sciences, MEChA, and the Democratic Party of Grant County.

Dr. Mary Hotvedt, Chair of Grant Co. Democratic Party was pushing the agenda of Occupy and educating people about it how it works.  I have never interviewed Dr. Hotvedt, but I would assume she knows something about Occupy if she is going to be teaching about it.

The Man Behind Occupy New Mexico

With obvious support coming from the Democrat Party, we turn to WHO keeps the Occupy movement working in New Mexico.

Jeff Ethan Genauer, a man with a handful of aliases, is a thirty-three year old political activist living in northern New Mexico.  Mr. Genauer has worked for various radical political groups for years as he pushes environmentalist issues.  He goes where he is told to go working for various environmentalist groups.  This man is a community organizer by definition but also a self-proclaimed ‘anti-Zionist’ and ‘eco-anarchist’ Jew.

Genauer has been active in environmentalist politics since the early 2000’s when he joined a 650 mile walk for ‘Peace and Nuclear Abolition.’  A few years later we find that Genauer is mentioned in an article after the Katrina hurricane as being a director for Rising Tide an environmentalist group:

“Poor, indigenous and environmentally vulnerable communities should not bear the brunt of disease epidemics, droughts, floods, melting ice, rising oceans, hurricanes and other catastrophes caused by the global climate change at rich countries are responsible for due to our prodigious burning of coal, oil and gas for energy,” said Ethan Green of Rising Tide North America.

The Camp for Climate Action hopes to attract thousands to England’s Megawatt Valley on Aug. 26-Sept. 4 to learn about global warming and techniques for direct action against “climate criminals.” Participants plan to converge on the Drax power station Aug. 31 for a creative mass action to shut down the United Kingdom’s largest emitter of carbon monoxide. Rising Tide has joined forces with environmental justice groups combating pollution from refineries, power plants and coal-processing facilities.

“Unlike Rising Tide, most other organizations who say they work for climate protection merely promote technological reforms to the capitalist economy, and shy away from demanding deep changes that address the common causes of war, social and economic injustice and ecological destruction,” said Philadelphia-based activist Ethan Genauer.

Other groups Genauer has been active as a writer at resilience.org, jews4foodjustice.blogspot.com, earthfirstjournal.org.

In 2010 Genauer supported the Code Pink movement as it marched on Washington on Mothers Day.  He also shared pictures of himself protesting the use of nuclear weapons the same month.

Genauer currently works at School Gardens Across America, was educated at Rutgers University and Northern New Mexico College according to LinkedIn.  Seeking to further the environmentalist agenda Genauer was a candidate for Environmental Education Association of New Mexico’s board of directors in 2011, an organization furthering ‘the cause’ Genauer pushes.  He spends a lot of time in Santa Fe where he has worked as a tutor for NNMC, but also frequents Albuquerque for political events.

As to Occupy connections go, Genauer has been recognized by La Jicarita‘s New Mexico’s online environmental political blog as the man behind Occupy New Mexico’s internet activism.  Genauer also received a mention as the webmaster for OccupyNewMexico.Org by journeysantafe.com.

If this were not enough, Ethan has repeated tweeted identical pictures to that which he has posted on Facebook: 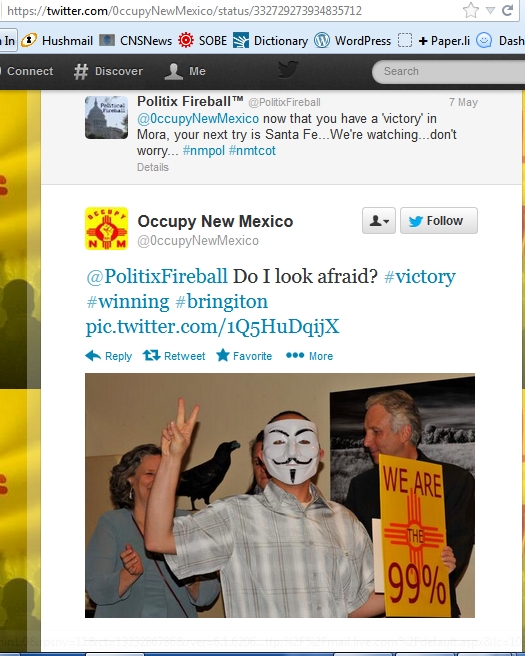 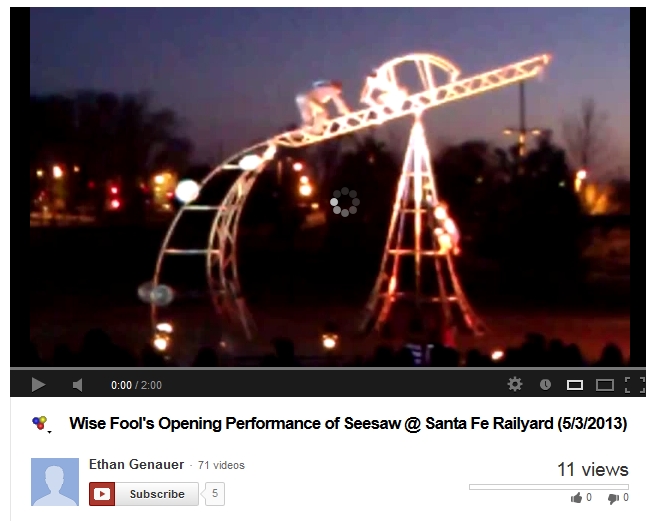 Genauer is a busy activist pushing agendas like the one he supported in Mora:

As Genauer wrote in the tweets above and elaborated below, not only has the Mora agenda been something the left has been working on for a long time, but it is something that Occupy and the left will be pushing for in Santa Fe and other places.  We need to oppose these people and protect freedom!

Here in New Mexico, community rights organizing is going strong in the town of Las Vegas and in neighboring Mora County, and it is also taking root in Santa Fe, Taos and other communities. In Las Vegas, the city council has passed a “Community Bill of Rights” which bans bans natural gas fracking within the municipality, although the mayor has refused to sign the bill and he is now facing a recall campaign from grassroots activists. In Mora County, advocates for community rights won the 2012 election and now hold the majority of seats on the county commission, which they are using to craft an ordinance to ban fracking and protect local water rights. E&E reports the community rights movement is continuing to grow in New Mexico.

The evidence for this growing movement is beginning to appear in Santa Fe. On Tuesday, April 16, 5 to 6 pm, tune in and listen to KSFR 101.1 FM Santa Fe Public Radio host Diego Mulligan interviewing Thomas Linzey, the senior legal counsel for the Community Environmental Legal Defense Fund (CELDF) during his radio show from 5 to 6 pm. Then on April 19 and 20, CELDF will present a Democracy School in Santa Fe, NM for about 25 participants, followed by a strategy session on building the community rights movement in New Mexico and throughout the Southwest.

In conclusion, this community organizer and leftist is here to further agendas from the left, as he has been doing.  Mr. Genauer is kept quite busy doing this work, as made clear in the screenshot below: 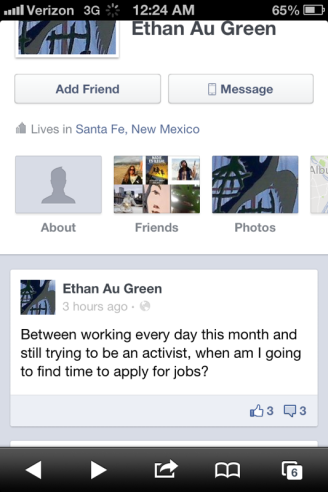 These people have all the time in the world because they are paid by the left to do this work…most of us on the right are unpaid and are simply volunteers such as myself with a passionate love for our country.  We work when we have time to further our cause, but do not have an expense account and pay for nearly everything out of our own pockets.  Because of this we need to be extra watchful and band together to win!

Keep up the good fight, fellow Americans, and do not give in!!  The Mora agenda’s of the left must be stopped as we defend the pillars which are nation was founded on!

Have a tip regarding this story or another pieces of interesting information to share? Email me here!  Another thing you can do is contact the New Mexico Democrat Party here and ask why they appear to support the Occupy New Mexico movement on their website.

10 thoughts on “Who is Occupy New Mexico? Another anti-Zionist, anarchist, leftist…”