Free speech is one of the most powerful things that makes our nation great– it is guaranteed by our Constitution’s Bill of Rights specifically in the first amendment which reads as follows:

“Congress shall make no law respecting an establishment of religion, or prohibiting the free exercise thereof; or abridging the freedom of speech, or of the press; or the right of the people peaceably to assemble, and to petition the Government for a redress of grievances.”

Before diving into the interesting details of a guy who clearly use (and abusesd) his free speech rights in raging attacks on conservatives last week, I would like to share a little bit about this character.  Jann Scott is the CEO of Boulder’s Channel 1 Networks Television and while he has a long history of saying and doing what he wants (to the dismay of more stable members of Boulder’s community), he has a strong dislike and hatred for people who disagree with his raving.

Here’s one video from Mr. Scott, decrying a Boulder’s local “Best Mixologist” event.  A minute or two of this video shows what kind of a person Mr. Scott really is (Warning: Very strong language):

Interestingly enough a quick look through Mr. Scott’s YouTube channel shows that most of the videos he makes are of a similar caliber.

Scott has a long history of working on the media level.  He claims to have been seen on CNN, MTV, CBS and NBC.  His start in journalism could have started when he was in the CIA working for the International Times…then again, maybe this is fabricated or perhaps Scott cleaned toilets for a building the CIA used?…

Scott has a habit of exaggeration and forms of ‘free speech’ which are not appropriate.  In this article he made dubious claims about another Boulder resident ‘attacking’ him:

Boulder police are investigating an accusation by local Internet video producer Jann Scott that Seth Brigham “attacked” him on Saturday.

Scott made the allegation publicly Thursday on his Boulder Channel 1 website.

Boulder police spokeswoman Kim Kobel confirmed that police received a complaint from Scott on Wednesday. Detectives are investigating what she called an “incident.”

In an interview, Scott said Brigham had been “stalking” him since learning that Scott shared old e-mails with the city that described Brigham as dangerous.

Both men were at a meeting Saturday morning in Boulder that they declined to identify on the record.

Brigham admitted confronting Scott and yelling, “Why’d you do it?” several times — in reference to the e-mails Scott shared with the city — and described the two men as being “face-to-face.”

However, Brigham said there was no contact, while Scott said Brigham pushed him several times before other people intervened.

Brigham countered: “I was upset. I didn’t try to make him change his testimony or anything. I consider what he said slander. I shouldn’t have spoken to him at all.”

The Boulder Channel 1 article describes Scott as a “witness” in the city’s case against Brigham.

Yet city spokeswoman Sarah Huntley said Scott is not a listed witness for the city in the ongoing court case. Some of the e-mails Scott provided, however, were included in the case file, Huntley said.

City officials sought a restraining order against Brigham after he sent a large number of e-mails to City Council members detailing both business dealings and personal information he found on the Internet. City officials also cited obscene outbursts by Brigham at public meetings.

Brigham is not accused of a crime, and he is not being prosecuted.

A workplace violence expert testified in a hearing Monday that such obsessive behavior can be a precursor to violence. Boulder County Judge David Archuleta has not yet ruled on whether the temporary restraining order, which bars Brigham from e-mailing council members or attending council meetings, should be made permanent.

Police concluded that Scott did not break any laws when he speculated publicly in 2008 whether it would be “appropriate” to assassinate the mayor or other public officials when “civil justice is not enforced.”

Then-Mayor Shaun McGrath cited that incident, as well as outbursts by Brigham, when city officials requested a police presence at City Council meetings — a policy that continues today.

Speculating about the assassination of the town mayor isn’t exactly the kind of free speech I support.  Should somebody be arrested for it?  It depends how it was meant…costing an elected official an election is one thing, but something that could be interpreted as a physical threat shouldn’t be said against one’s worst enemy.

Last week I encountered Scott for the first time when his strange tweets were brought to my attention.  This guy alleged that the NRA was at fault for the Newtown incident.  After the Boston Marathon Bombing Mr. Scott began to claim that conservative gun-owning NRA members were at fault for the terrorist attack as well.  Really?  To make such an accusation without any reason is ridiculous, especially for somebody that is a member of the media…but then this is Jann Scott and as we have seen above, there is little that is too outrageous a matter for him to say in public, on a blog or on TV!  For some reason after tweeting a bunch of nonsense (some screenshots of which can be seen below) Mr. Scott not only locked down his business Twitter account @BoulderChannel1, but also his personal account @JannScott: 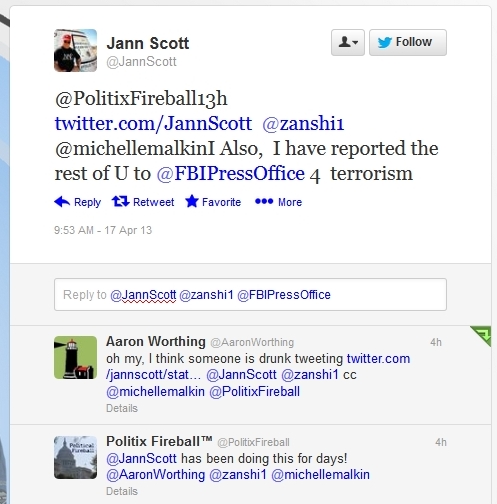 When Mr. Scott’s irresponsible and suggestive tweets were noticed on Twitter he encountered a strong force on Twitter who opposed him!  And the last few days he has had both of his accounts locked down.  Why is he afraid of his actions?

SPAM BLOCK @JannScott & @BoulderChannel1 asap. They are reporting people to FBI as terrorists just for being #NRA members. @GregWHoward

@PolitixFireball @BoulderChannel1 @JannScott on web show he said: coming for ur guns- you resist, we're gonna kill ya, Blow Ur brains out

Anarchists such as @BoulderChannel1 are jamming Fed officials offices with fake reports on Conservative Tweeters.Be aware &report to twitter

In case somebody should misunderstand the above (which would be difficult, but possible), I would like to share some ‘words of folly’ from Mr. Scott’s blog which will further show his thought process and better explain his comments than the 140 which Twitter allows:

So today’s date April 15 is significant. It is tax day, a day right wingers hate. It is near Hitlers birthday, so they love that day. And it is near April 19th a day to celebrate terrorism in America by the right wing.

In boulder on April 20 there is an anti american rally on the CU campus surrounding pot. Why April 20th? Because it celebrates the attacks on the american legal system. it aligns itself with Columbine, Waco, Ruby ridge and Hitler.

There is a right wing battle going on in congress over guns right this week.

The movement is know as the Patriot Movement. Today was Patiot’s day in Boston celebrating Battles of Lexington and Concord on April 19, 1775 to be gin the Revolutionary war.

Who ever attacked Boston today was one of these nut jobs from the modern day Patriot Movement, from the Tea Party, from the NRA from the Republican Party.

Yesterday there was an NRA Nascar race in Texas where the right wing had become extremely worked up. In fact their attack son me were unprecedented.

So my thought is that what happened in Boston is an extremist act by right winged gun nuts to celebrate their cause.

So…Scott stated that conservatives, Republicans and NRA were not righteously indignant over his attacks on NRA gun owners?  Mr. Scott claims he is justified for reporting us to the FBI and Homeland Security for simply disagreeing with him.  Finally when he would not stop his libelous attacks many began to contact his sponsors which lead to at least one sponsor pulling advertising from Mr. Scott’s website.

In America there are many ways to attack evil, but one of the greatest is to expose it to light.  Do you have something to share with Mr. Scott?  I would recommend you tweet him about it at @JannScott and @BoulderChannel1. Other ways to contact Scott are via Facebook, and through information on his website.  I would also recommend you look through his website and contact his sponsors who may not be aware of Mr. Scott’s attacks.  Mr. Scott has sought to silence many of us with threats, but this is a free country and such attacks should not be tolerated!